Founded in 1830, Rivolier is a family-owned, French business group. Starting out as a weapons and bicycle manufacturer in Saint Etienne, it has since expanded its core businesses.

Rivolier was refounded in 1989, when the company decided the time was right to be firmly focused on the distributor profession and to be in phase with requirements prompted by its major clients and partners.

With the emphasis on a targeted external growth policy since 1989, the Rivolier group gained expertise, diversified and grew in strength driving it to a new industrial status. The Group can now assert itself as a Systems provider, backed by a powerful logistics hub, itself bolstered by an up-to-the-minute management system. 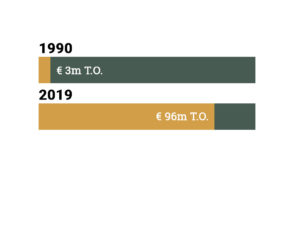 1903: The company located to Saint-Étienne

1909: Start of the bicycle production

1950: End of the bicycle production

1962: Rivolier became the distributor of the Remington brand

1973: Stop of the production of Rivolier rifles in Saint-Étienne (European sub-contracting)

1989: Rivolier bought up by Arnaud Van Robais who became the majority shareholder and Chairman

1993 : Inauguration of the new premises in Saint-Just Saint-Rambert

2003 : Rivolier entered into the biggest contract in the history of the industry with the Police Nationale and the Gendarmerie Nationale for the supply of 250,000 SIG Sauer SP 2022 handguns

2015 : Doubling of the surface area and creation of a multi-modal logistics hub